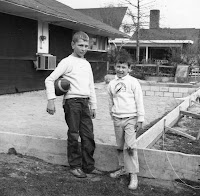 The cold war and the Cuban Missile Crisis had a significant impact on your life. One result that you’ve previously mentioned was that your father felt it was important to teach you, at the age of 12, to drive, even though he failed to explain exactly where you were supposed to drive to in the event of a nuclear war.

(That's your brother and you. The cinderblocks of the bomb shelter are visible in the background.)

And there were other ramifications. One was that your father decided to build a bomb shelter. This came at a time when your parents were adding a third bedroom and a playroom to the back of the house, so adding a cinder block and concrete underground room with a large metal trapdoor (in the floor of a closet) was not as far fetched as it might have otherwise seemed.

Once completed, the bomb shelter was the size of a bedroom. It had a large water tank, a hand-cranked ventilation system, bunk beds, and several weeks’ worth of canned foods. You cannot now recall what the bathroom facilities were, but certainly they’d been arranged for.

The creation of this bomb shelter gave you a great deal to feel anxious about, especially given the possibility that your father might be at work in New York City when the Russians attacked, and that you, as the oldest son, would therefore be somewhat in charge of your family’s survival. In no particular order some of your concerns were:

A) The sirens warning that a nuclear attack had begun. Your father told you that there would be a certain siren blast if a nuclear war started. Unfortunately, you cannot recall him explaining what that blast would sound like or how it would differ from the frequent siren blasts which summoned the local volunteer firemen to normal incendiary events. Hence, there were many moments when you heard the sirens and wondered if this was IT.

B) The devices for measuring radiation. Should the war come, you would have to spend several weeks in the shelter before it was deemed safe to emerge. To deem it safe to emerge would require testing the air and ground with several small metal and glass instruments that you were never quite sure how to operate.

C) Getting home in time. You attended school a little more than a mile away, where, now and then, the whole school practiced huddling under desks in case of a nuclear attack (Giving the phrase “bomb scare” an entirely different meaning. You also seem to have a vague recollection that for a while it was suggested that, as an alternative to huddling under your desk, you go to your locker and stick your face inside it, but this could be wholly and totally a figment of your imagination).

So this presented two problems. First, you would have to get out of school without being caught by a teacher and sent back to your desk (or locker), and second, you would have to sprint home in under fifteen minutes (you’re surprised your father didn’t make you go out for long-distance running).

D) The neighbor problem. Perhaps the most disquieting aspect of the bomb shelter was that all the neighbors knew about it. So suppose the war began and you got your mom and brother safely inside, and then Stecklers knocked? Or the Ostrowers? Or the Kings? Would you let them in or keep them out, thus sending them to almost certain death? How many of your neighbors would you let in? How many could you let in before it became too crowded and endangered the lives of all involved?

This was a lot of responsibility for a 12 year old.

It was around this time that you considered writing a letter to the dreaded Russian leader, Nikta Khrushchev, requesting that if he did decide to go to war, he would do it on a weekend afternoon, after your father got home from tennis.
Posted by Stephen at 7:10 PM No comments:

A letter to your editor from a teacher in California.

Thanks for sending me Todd Strasser's new book. I stayed up into the late hours reading it; it is so compelling. Of course, as a teacher, I do believe that education is the way out of poverty and the gangbanger life. However, this book demonstrates the Herculean tasks of these inner city kids even getting to school and then trying to get a real education once they get to school. This inner city life is so chilling and painful. I had to keep reminding myself that this is America a couple of miles, in some cases blocks, from what most Americans consider "normal" life.

I am in awe of how Todd Strasser is able to write such passionate books about the most intense issues and put human faces on them and yet finds a way to bring in a little hope. He exposes this issues in a way that teens (and everyone) can relate to and yet I could teach his books in an eighth grade class because he doesn't use profanity or explicit sex or violence and yet the books feel real.

You can see how powerfully this book affected me. Thanks for sending it. I start back teaching next week and will send you student reviews of this book.
Posted by Stephen at 2:34 PM No comments:

Memories of the Grateful Dead 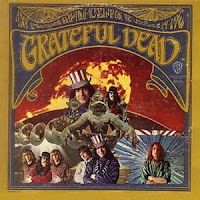 One day in the spring of 1967 you stood in the record department of E.J. Korvettes trying to decide between the first Cream album or the first Grateful Dead album (You can only assume that you
didn’t have the funds at the time to purchase both). 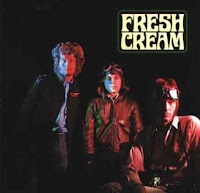 Flash forward to February 1969, your friend and Deadhead Dr. Richie takes you to a Dead show at the Fillmore East that starts around midnight. Your completely unreliable recollection is that by the time the show ended and you left, the sun was starting to rise.

Dr. Richie and you saw the Dead at least once a decade, and in some decades, many more times than that, until Jerry Garcia died on August 9th, 1995.

This week the New York Times is running a feature that asks fans to send in their photos:

After nearly 40 years and hundreds of concerts, we were still looking forward to spending the evening with them. But a little more than a month before this one, Jerry left. As [Robert] Hunter wrote in his elegy, he lives inside us.
Posted by Stephen at 3:47 PM No comments:

You listen to audio books in the car because you spend most of your reading time at home doing research for whatever book you’re currently writing, or enjoying articles from The New Yorker or The New York Times.

But in the car you love listening, and almost wish sometimes that you spent more time driving just so you could listen more (even though that wouldn’t be doing the environment any good).

You would imagine that most publishers of audio books wouldn’t want writers reading their own work because writers are writers, while good and experienced readers (who are often actors and actresses in real life) bring drama, humor, varying voices, and timing to the story. But you have come across some books where the writer read his own work and you thought he (You hope to get to Anne Lamott’s reading of Bird by Bird in your next blog) did such a wonderful job that it made the experience even better. For you, all these books had that rare “I never want this story to end” quality.

The Life and Times of the Thunderbolt Kid by Bill Bryson is about growing up in Iowa in the 1950s and, for you, was absolutely drop dead hysterical. You’d like to know how today’s teens react to it, but since you grew up in the same decades as Bryson, and can relate to a lot of what he talks about, it was priceless.

Kitchen Confidential by Anthony Bourdain, is about his experiences as a cook in various restaurants before he became a famous author and TV personality. You wouldn’t suggest it for anyone under the age of 16, but it too is funny and wonderfully read by the author.

The Absolutely True Story of a Part Time Indian by Sherman Alexie. Read by the author, it is a truly heart-wrenching and funny story of what it’s like to be an American Indian growing up on a reservation today. You’d guess it’s for grades 7 or 8 and up, and it’s about as griping and well-told a story as any YA you’ve ever read or listened to (Sorry, you HATE sounding like flap copy!).


You’d put The Absolutely True Story of a Part Time Indian right up there with Feed, by M.T. Anderson, which also happens to be available as an audio book, although you haven’t listened to, but only read, it.

If you haven’t read Feed, here’s the first line, “We went to the moon to have fun, but the moon turned out to completely suck.” Does that not equal Pynchon and Melville?

And of course you realize there are certainly hundreds more authors who’ve done a spectacular job of reading their own audio books. Perhaps someone out there will suggest a few? 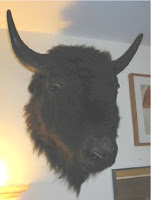 Mr. Bill says, “If you think Bill Bryson is good, you should read Bill Bison!”
Posted by Stephen at 10:08 AM No comments: