The Height of the Cold War 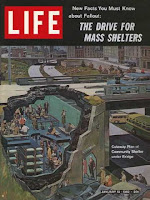 It was a frightening time for everyone, and especially for one 12-year-old boy on Long Island.
Posted by Stephen at 12:08 PM No comments:

Strasser (Kill You Last) brings readers to the 1960s Long Island of his youth, with one crucial difference: in this story, the Cuban Missile Crisis leads Russia to bomb the U.S. The plot alternates between two threads set before and after the bomb drops; in the immediate aftermath, 11-year-old Scott, his family, and a handful of neighbors endure the increasingly difficult conditions in the subterranean bomb shelter Scott’s father built, waiting for radiation levels to fall. The format allows Strasser to have the best of both worlds. In the “before” chapters, he presents a vision of life during the Cold War that feels ripped from personal memory as Scott grows aware of racial prejudice, the prevailing “us vs. them” mentality toward Russia, and his own nascent sexuality (“You want to die without ever seeing a breast?” Scott’s snide friend Ronnie asks). Meanwhile, the “after” chapters are claustrophobic, heartbreaking, and at times ugly as civility breaks down among the few adult and children survivors. An eye-opening “what if” scenario about the human response to disaster. Ages 10–up. Agent: Stephen Barbara, Foundry Literary + Media. (Sept.) 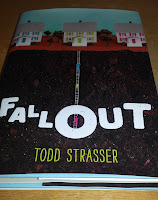 The first hardcover copy arrived in the mail yesterday.  What a thrill to hold it in my hands and feel its weight. Candlewick did a superb job.

Using FALLOUT in the Classroom

Fallout can be used to introduce the concept of embedded research.

Embedded research is information that is embedded so seamlessly into the story that it enriches the detail and realism in the story without seeming didactic.  Students might ask, "What is the difference between historical fiction and fiction with embedded research?" In answer to that question is that historical fiction has main characters, who actually existed in situations that really happened.  Stories with embedded research are about fictional characters in situations that really happened or involve accurate details about things that take place in the story. Todd Strasser's Fallout asks the question, "What would happen if a nuclear bomb was dropped and your family was the only one in the neighborhood with a bomb shelter?

Todd Strasser grew up in the 1950s and experienced the Cold War first hand.  His family had a fallout shelter and he has parlayed some of his own experiences into a story about a twelve-year old-boy named Scott whose family is ridiculed for building and stocking a bomb shelter. Then the Cuban Missile Crisis occurs and his neighbors are singing a different tune. In Fallout the author suggests that a bomb is actually dropped and  neighbors force their way into the bomb shelter which was only provisioned for a family of four. Without enough food, water and air for all of them, tensions break out.  But the biggest question is if they can survive until the radioactivity outside abates, what will they find when they get out?

Fallout by Todd Strasser. This was, by far, July’s most compelling book. It was also, by far, the most disturbing book I’ve read, perhaps in the last year. In this coming of age story, Scott, the main character, finds himself in a hauntingly plausible dystopia when threats of nuclear war become a reality and his family–along with several interlopers–is trapped in an increasingly dismal situation in their underground bomb shelter. The author, who came of age in the early 1960s, when this story is set, lived through the tensions of this era, and his memories of collective paranoia and fear are palpable in this book. Definitely a page-turner, but not for the faint of heart. I found myself disturbed for days afterward–so I imagine many younger readers would be, too.  ---  Jenny Sawyer   http://jennysawyer.com/author/jennysawyer

Wow! I loved Fallout by Todd Strasser! Judging from the reviews and press I've read about the novel, it seems like most people did as well. I don't know why I didn't make the connection when I started reading, but I realized on his website that Strasser also wrote The Wave, which I had to read in my 8th grade Reading class. I remember hating the teacher, but loving that book and its implications.

I experienced something I don't often get to with novels: I felt like I was right there with the characters. The way that Strasser described the tension in the shelter and the anxiety of the neighbors made me really feel like I was living it with them - horrifying and intriguing.

I also loved the way Strasser examined human nature - the way the characters changed from ridiculing Scott's dad's shelter to wanting in on it, and then once they were in, criticizing his hap-hazard gathering of items like food, water, clothing, etc. - the ultimate "looking a gift horse in the mouth," would have to be critiquing the man who saved your life. I really loved watching these changes unfold and seeing how unpredictable people can be when faced with catastrophic events. For instance, one of the characters, Mrs. Shaw, says she would never be able to sacrifice someone else's life to save her own. She's obviously shocked when she learns that her husband did just that: he helped Scott's dad keep too many people from getting into the shelter, essentially killing them.
---  http://mrstolleson.blogspot.com/2013/07/fallout-by-todd-strasser.html


Todd Strasser’s amazing book, Fallout, does not disappoint! Through 6th-grader, Scott, we experience the horror of 10 people trying to survive underground in an bomb shelter that’s only supplied for 4. Alternating chapters show us what led up to the Cold War nightmare. It’s the first middle-grade novel I’ve read in a while that had me biting my nails to the quick. Scary and fantastic!
---- http://www.librarything.com/work/13912275/reviews


I was hooked within the first chapter! What would have happened if the Cuban Missile Crisis hadn't been prevented? Not knowing much about this time period, I was intrigued by the angst felt within all households at this time. How do you prepare for the incomprehensible? Todd Strasser does a fantastic job describing what almost happened!


A fascinating--and terrifying-- re-envisioning of the Cuban Missile Crisis told through the eyes of a 12 year old whose father was the only one in the neighborhood to preparefor nuclear war.
What if the crisis wasn't averted?