I signed Fallout ARCs yesterday at BEA.  Candlewick provided four large boxes of galleys. What a pleasure it was to see that they’d printed so many.  The line for signatures was long. There were YA librarians looking for giveaways for summer reading programs, but also a number who said they’d heard good buzz about the book and wanted to take a look.

What they're saying over at Goodreads:

"Although it’s historical fiction, it reads like survival/dystopian fiction and I found it to be very powerful."

"I was absolutely riveted by the powerful bunker scenes - they convey humanity at its best and worst."

Posted by Stephen at 8:22 AM No comments: 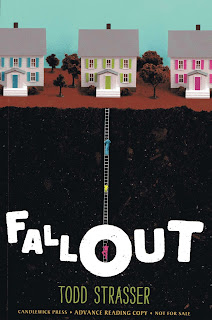 While it won't be officially published until September, Fall out has been chosen by the Junior Library Guild.

Fallout is part memoir and part speculative fiction. It is rooted in my experience as a twelve-year-old boy living through the Cuban Missile Crisis of 1962.  What made this event unique for me was that our family was the only one in town who actually had a full-scale bomb shelter built beneath our house.

This gave me a unique perspective in as much as I not only worried along with everyone else in our country about the very real possibility of a World War Three, but I had to worry about trying to survive as well. Many of my anxieties concerned the possibility that a war might start while my father was at work, and therefore too far away to get home before the bombs fell. In that case:  1) Would there be time for me to run home from school before the bombs fell?  2) Since everyone in town knew we had a bomb shelter, would others get there first and demand to be allowed in? 3) What if my mother, brother and I got inside and our neighbors came and wanted us to let them in? 4) How would we know how long to stay in the shelter? 5) What would we do when we got out? These worries mixed with and influenced many of the other insecurities – about girls, sex, athletics, school – that boys that age feel.

Thus the Bomb is partly the story of what really happened, and partly about what could have happened. As a memoir, it is a recollection of the affect such a dire world event had on an innocent young man who was growing up in a protected homogeneous middle-class environment. As speculative fiction it is an exploration of what very well might have occurred had there really been a war.

And finally, I hope that, in its own small way, it is a celebration of life in the face of adversity.
Posted by Stephen at 1:57 PM No comments:

The Houses of Wish You Were Dead

Wish You Were Dead is set in the fictional town of Soundview, which is not unlike Larchmont/Mamaroneck where I live. It’s a good setting for a mystery that involves income inequality because this is an area that displays some fairly stark examples of it. Housing ranges from mansions like Madison’s to the apartment in which Maura lives over a store.

Wish You Were Dead

"Today at school Lucy Cunningham looked at me like I was something the cat coughed up.  I don’t have to explain who Lucy is. You already know because there’s only one kind of girl who would look at anyone that way.   I’m going to be completely honest here because, after all, what’s the point of pretending? So here goes. It really hurts when Lucy looks at me that way.  But here’s what hurts even more. Sometimes when people look at me that way, I feel like maybe they’re right."

And so begins Wish You Were Dead,  Todd Strasser’s award-winning mystery about the unintended consequences of ill wishes. 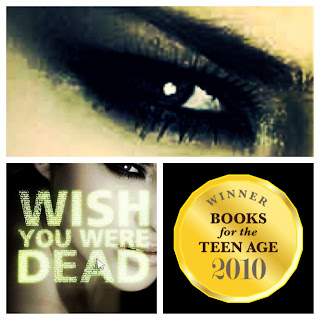