Q & A with Todd Strasser 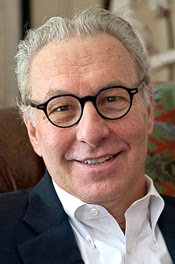 Bullying, school shootings, and homelessness are some of the weightier topics Todd Strasser has tackled in his novels, but he’s also dabbled in more lighthearted fare, including his Help! I’m Trapped… series for middle-grade readers. The author drew from his own childhood to write Fallout, which Candlewick will publish September 10. The book marks a significant milestone for the author, as it is his 100th original work of fiction (his oeuvre also includes a number of novelizations). In the novel, set on Strasser’s Long Island, N.Y., childhood turf, Scott’s father builds the only bomb shelter in the neighborhood as the Cold War heats up in 1962. Strasser’s father did the same, but happily the family never had to take put the shelter to use. Scott’s family isn’t so lucky.

Obviously your father’s building of a backyard bomb shelter created an indelible memory. How did you come to write a novel based on that incident?
For many years, when I thought about what I wanted to write about, I took a look at what was going on in the present and took a look ahead to the future, but when I got close to turning 60, I started to look back. And the first thing I saw was this incredible experience of my father building a bomb shelter in case of nuclear war. The unintended consequence of that bomb shelter was that I was filled with anxiety about a nuclear war. What if I was in school when this happened? Would they let me run out of school to try to get home to my bomb shelter? This novel actually began when I was 12 years old, lying in bed at night wondering what I would do.
In 1962, was having a personal bomb shelter a rarity?
I do know that we were the only ones in our neighborhood – we lived in Roslyn Heights – who had a bomb shelter. I was known as the kid with the bomb shelter, and kids would tease me and ask if I’d let them in when the time came. I didn’t know it at the time, but after doing a lot of research for the book I realize there was a tremendous amount of publicity surrounding bomb shelters. There was a mass drive to build them in public places, and civil defense agencies put up those little black and yellow signs everywhere indicating underground shelters. 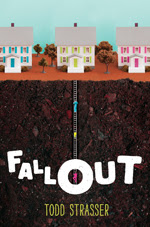 Would you say that this is your most personal novel yet?

Yes, it’s very much based on my own life as a boy, and much more autobiographical than most of my earlier books. Almost all of the characters are conglomerations of people I knew – kids I played with on my street, neighbors, and teachers – though no one character is exactly a real person.
Fortunately, Fallout isn’t an accurate portrayal of how the Cold War played out. What do you hope readers will take from the novel?
People who have written about the novel seem to be focusing on the idea of the Cuban Missile Crisis and these people stuck in this bomb shelter together. But to me, the book is about a young man’s growing awareness of the world around him, and the loss of innocence. Here Scott had this world of going to school and playing with friends on the block, and suddenly forces from thousands of miles away want to destroy him. This is really about a boy who had to grow up very quickly.
And I also bring in the Civil Rights Movement, because that same month in which the book is set, October 1962, there was a riot at the University of Mississippi when James Meredith became the first black student to attend the school. The other thing I wanted to include was the theme of the objectification of women. Scott’s friend Ronnie, who is fixated on women’s breasts – a condition at least partly fostered by the Playboy magazines his father leaves around the house – is constantly badgering Scott to share this fascination. But in the squalid conditions of the shelter, where he and Scott actually confront adult human nakedness for the first time, the mystique is dispelled by the reality that flesh is merely flesh.
Fast forward from 1962 – how did you discover you wanted to be a writer?
When I was in college in the early 1970s – first at NYU and then at Beloit, since I was on the six-year-plan – I had an opportunity to do an independent writing project for a semester. So I began what eventually became Angel Dust Blues, my first novel. When I graduated, there didn’t seem to be many “Help Wanted: Novelists” ads in the newspaper. So I went into journalism, which I think was a very beneficial thing for me.
How so?
Well, I learned a lot about research, and I do a lot of research for my books, so that was helpful. But journalism was limiting – you have to tell the truth and you can’t have happy endings. After I left journalism I spent a little time in advertising, and that was a disaster. All the while, I was writing short stories songs, poems, jokes – anything. I sold a piece of fiction to the New Yorker over the transom. Next thing I knew I had an agent, and Putnam published Angel Dust Blues in 1979.
And is it true that you were also trying your hand at some less conventional writing around that same time?
Yes! In 1978, a close friend and I began talking about how feeble the sayings in fortune cookies were. I’d just sold Angel Dust Blues, and had gotten a $1,500 payment for signing the contract. I’d hoped to use the money to start some sort of business that would provide income to live on while also providing more time to write than a regular nine-to-five job would. So my friend and I discussed selling specialized fortune cookies for niche high-income groups. Something like “No one will die on your operating table today” for doctors, “The jury will find your client innocent” for lawyers, and “There’s a hole-in-one in your future” for golfers. 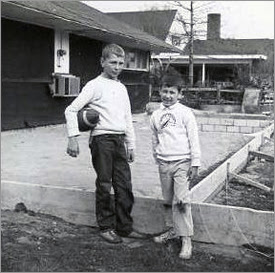 Todd Strasser (l.) and his brother, Leigh, stand by the underground bomb shelter their father built in 1962.
So you ran with that idea?

Not exactly. One night at a party, I was trying to impress a young woman with my entrepreneurial prowess when she mentioned a different kind of fortune cookie that she’d just encountered at an East Side restaurant – let’s call them “grown up” fortune cookies. So we founded Dr. Wing Tip Shoo’s fortune cookies, with sayings like, “When in Rome, ask for Florence,” “Women who sleep with judge get honorable discharge,” and “Clairvoyant contortionist is one who can see her own end” – my personal favorite.
Did they catch on?
They were an immediate hit, and it wasn’t long before novelty representatives were selling them all over the U.S. The income supported my writing “habit” for the next 12 years, at which point I was doing well enough as a writer, and from school visits, to leave the cookies behind.
After Fallout, what’s next on your fiction agenda?
I have a YA novel coming out in January from Simon & Schuster. It’s called No Place and it’s about Dan, a boy whose family loses their home and has to move to a tent city. Dan was vaguely aware that things like that happened, but not to families like theirs. And I’ve signed a contract with Candlewick for another book, whose working title is Moby Dick in Space. I’ve done adventure and sci fi-ish books before, but this one is a bit different. It’s about the destruction of the environment on Earth and a number of other things. The problem is it doesn’t seem to be ending – it keeps going and going and going! I keep thinking this thing has to end but it seems to be endless. It’s an unusual experience for me.
Your novels span genres and age levels – is there one fictional space you feel most comfortable in?
I seem to bounce around, sort of at my whim. If I’ve worked on a realistic novel, I might want to do something kind of light and funny next. And I seem to be able to move back and forth pretty comfortably between middle grade and YA, depending on whatever the next idea is. I started writing middle grade when my kids, who are now 25 and 29, were middle graders themselves. Before that I did mostly YA, and now that my kids are older I’m writing more YA stuff again. But with Fallout, I honestly wasn’t targeting a specific age group at all. I was writing from the heart, and wanted to be as honest as I could possibly be. I truly wasn’t certain what audience it would be for – all I knew is that I wanted to write it.
And is it gratifying to have your 100th original novel published?
It’s funny. Since writing truly is my way of life, getting to a certain number of books doesn’t necessarily mean all that much to me. I plan to keep on doing what I’ve been doing. And who knows? Maybe I’ll find that the first 99 books were just practice! I do feel that it’s very nice that the 100th book happens to be Fallout, since this is such a special book to me.
Posted by Stephen at 7:40 AM No comments:

It Came Out of the Blue, and I'm Floored

A Review of Fallout from the Wall Street Journal


It is all too easy, half a century on, to regard the coruscating terror of ordinary Americans during the Cuban Missile Crisis as a dry historical fact rather than a traumatic lived experience. The novelist Todd Strasser, who was a boy at the time, and whose family preparations for nuclear war included building a bomb shelter under their suburban ranch house, has evidently not forgotten the intensity of 1962. Memory here has given rise to a gripping and superbly constructed novel for sophisticated young readers ages 10 and older. In "Fallout" (Candlewick, 258 pages, $16.99), however, the Russians really do drop the bomb, and when the sirens wail, Scott Porter and his parents and little brother, rushing to their homemade bunker, are almost overwhelmed by neighbors frantic to gain refuge in the area's only fallout shelter.

There's not a word out of place in this evocative book, which toggles between the ever-more-dire predicament of the people in the overfilled bunker and the placid neighborhood during the weeks before the crisis. Mr. Strasser's skill at ratcheting up the tension is, if anything, exceeded by his ability to conjure midcentury ways of thinking—and a vanished culture in which aspirational fathers drank Dubonnet, beatniks were a present-tense curiosity, and children were amazed at the very idea of homosexuality.
Posted by Stephen at 5:04 AM No comments: