On the first page of his exciting, harrowing new novel, Todd Strasser pulls his readers into a nightmare that almost came true. Scott Porter is a fifth grader living in a New York City suburb in 1962. One night his father shakes him awake, saying, “We’re being attacked.”
Strasser has reimagined the Cuban missile crisis and set “Fallout” in a realistic John F. Kennedy America. Mickey ­Mantle plays hero for the Yankees. Nikita Khrushchev plays villain for the Reds. Dads go to work and read Playboy. Moms keep house and smoke. The one unhistorical detail is that in this story the Soviets don’t back down. They strike.
The narrative that follows alternates between present-tense scenes of acute distress as the Porter family and six largely unwanted guests struggle to stay sane and alive in an ill-stocked bomb shelter meant for four, and past-tense scenes of the simple, everyday dramas of Scott and his pals in the lead-up to the bombing. Nothing so theatrically terrible happens inside the shelter, though there are some grisly arguments about reducing the number of hungry mouths. Yet as I read and suffered along with the characters, I kept thinking how comparatively pleasant it would have been for them to have faced one of those zombie apocalypses screenwriters are so fond of these days. The bomb shelter is a form of living death. No electricity, no privacy, enough food for only a few days and persistent questions about whether the occupants will starve or suffocate or kill one another before radiation levels fall enough for them to escape the shelter. And what will they find when they open that trapdoor?
“There’s down here and up there,” Scott says. “The ones who feel like they’re buried are alive, while the ones who aren’t buried probably aren’t alive.” Personally, I’ll take zombies. At least with zombies you know where you stand (they want to eat you) and you can look up and see the sky in between attacks.
By now you’re probably wondering whether “Fallout” is really appropriate for children. So let’s be clear. For all its horror, this is a superb entertainment suitable for any tough-minded kid over the age of 10. It thrums along with finely wrought atmosphere and gripping suspense. If the characters aren’t exactly overburdened with complexity, they’re better drawn than many of the people one bumps into in the average thriller.
Strasser, a prolific writer for children and teenagers, writes with purpose and economy and structures his book intelligently: The scenes of prewar life give context and emotional weight to what happens in the shelter. Without the prewar material, the tension and misery of the drama in the shelter might be unbearable.
My guess is that Strasser’s middle-grade readers know little about the Cuban missile crisis, and this exercise in “what if” should help them — in a way no textbook could — to understand a historical moment better known for what didn’t happen than for what did. By contrast, the author knows his material very well. He was 12 in 1962, and his dad built a bomb shelter in the family’s backyard. Given his experiences, it’s no wonder Strasser takes a strongly antiwar position, especially in an author’s note at book’s end. Thankfully, he had enough sense to leave most of the preachy tone out of his suspenseful
Posted by Stephen at 6:04 AM No comments: 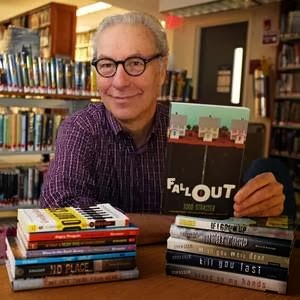 Long before he became a novelist, Todd Strasser was a 12-year-old boy whose father built a bomb shelter under the family’s Long Island home.

His latest book, “Fallout” (Candlewick Press, $16.99), set in 1962, takes a look at that era from the vantage point of an adolescent whose experience mimics Strasser’s — and whose father is equally prepared for disaster. Equal parts memoir and fantasy, it’s a page-turner aimed at the middle-grade crowd, with an appeal that extends to adults.

“The first fan letter I got was actually from an expat, an American in New Zealand, who said it really reminded him of how terrified we all were back in the Cuban Missile Crisis,’’ he says.

For Strasser, who’s come out with 140 books for young readers since 1979, “Fallout” represents a shift, of sorts, in subject matter. “My first original novel was probably the only other book I’ve ever written that was really, to a significant degree, autobiographical,” he says. That book, “Angel Dust Blues” — a coming-of-age novel set in the suburbs — was followed by bestsellers including the “Help, I’m Trapped In” series and such award-winning young-adult novels as “The Wave” and “Give a Boy a Gun.”

Strasser has lived in Larchmont since 1990. “Fallout” is his 100th original novel. Recently, he took a break from working on his first “science-fiction adventure story” to answer a few questions.

You are clearly one of the most prolific authors around. How do you motivate yourself to write?

It’s sort of the default activity of my life.

Why did you wait until now to write about a father who builds a bomb shelter to protect his family during the Cuban Missile Crisis?

For a long time I’ve been writing books about what’s going on now, or what I imagine will happen in the future, and I guess as I got a little older, closer to 60, I started looking back, and this amazing event in my life was just sitting there. I mean, in a strange way, my father gave me this amazing gift.

About a year ago, you got in touch with the family that now lives in your childhood home. The bomb shelter came as a surprise to them, right?

These people didn’t know about the bomb shelter until closing. You have to go through a trap door that was in a closet under carpet, and so the new owner went down there and found the cans of condensed milk and other stuff. There was a paper down there from 1962, a New York Times just lying there with headlines about the Cuban Missile Crisis.

You recently returned from a book tour in Germany, where you are pretty much treated like a rock star. What’s that like?

I wouldn’t say I’m a huge celebrity, but certainly it is different there for me than it is here. I’m on TV and people take pictures and they bring these books that are 30 years old and ask me to sign them. It’s pretty bizarre.

You write under the pen name “Morton Rhue” in Germany. How did you create that name?

Todd is similar to the word “tot,” which means “dead” in German. And Strasser is like “street’’ in German. “Dead street” in French is “mort rue,” and somehow that became Morton Rhue.

One would think you’d be fluent in German by now, but you make all your presentations in English when you tour Germany. Did you learn any new words on your last trip?

Whatever I learned on this trip was what the German GPS said, like “Recchts abbiegen.” I can say “Right turn coming up, left turn coming up.” That’s basically my German: German directions.

You’re known to be quite a surfer, and yet you only started when you turned 52.

It’s not like the pictures you see on TV of people riding these monumental waves. I go out there and I ride these waves that are pretty small and manageable, and it’s really a wonderful experience just being out in the water and this sensation of gliding along on a wave. I love it.

Early in your career, you spent 12 years running the Dr. Wing Tip Shoo fortune cookie company, which you created with the money you made after you sold “Angel Dust Blues.” What did you like most about that experience?

It gave me the freedom to write each day until around 3 p.m., at which time I would switch hats and become a cookie purveyor. It beat having a real job.
Posted by Stephen at 1:25 PM No comments: