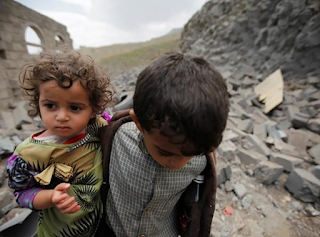 As we celebrate this International Day of Peace, I hope we keep in mind that among the many reasons to be against war is that children die in them. They die either as a direct result of being shot or blown up, or indirectly due to the starvation and disease that are always the byproducts of war. They died by the tens of thousands in World War One, World War Two, the Korean War, and the War in Vietnam. They continue to die in the current the Forever Wars of the Middle East and Africa.


(One Family’s Toll on a Cruel Day: 7 Children with Amputated Legs https://nyti.ms/2leRxdc)

The following is part of an article published by UNICEF in 1996.  “Children have, of course, always been caught up in warfare. They usually have little choice but to experience, at minimum, the same horrors as their parents—as casualties or even combatants. And children have always been particularly exposed. When food supplies have run short, it is children who have been hardest hit, since their growing bodies need steady supplies of essential nutrients. When water supplies have been contaminated, it is children who have had the least resistance to the dangers of disease. And the trauma of exposure to violence and brutal death has emotionally affected generations of young people for the rest of their lives.”

During the 20th century, the numbers of children, and of all innocent civilians, who died in wars steadily increased. According to UNICEF, this was partly due to “advances” in technology. “Aerial bombardment has extended the potential battle zone to entire national territories. World War II saw a massive increase in indiscriminate killings, with the bombings of Coventry and Dresden, for example, and the atomic bombs that were dropped on Hiroshima and Nagasaki. And this pattern was repeated in the Vietnam war, which is estimated to have cost 2.5 million lives.”

The UNICEF report goes on to say, “A further cause of the rising death toll for civilians is that most contemporary conflicts are not between States, but within them. Rather than being set-piece battles between contending armies, these are much more complex affairs—struggles between the military and civilians, or between contending groups of armed civilians. They are as likely to be fought in villages and suburban streets as anywhere else.”

“Families and children are not just getting caught in the crossfire, they are also likely to be specific targets. This is because many contemporary struggles are between different ethnic groups in the same country or in former States. When ethnic loyalties prevail, a perilous logic clicks in. The escalation from ethnic superiority to ethnic cleansing to genocide, as we have seen, can become an irresistible process. Killing adults is then not enough; future generations of the enemy—their children—must also be eliminated. As one political commentator ex-pressed it in a 1994 radio broadcast before violence erupted in Rwanda, "To kill the big rats, you have to kill the little rats."*

A much more recent example of this is what is currently happening in the Syrian civil war, where researchers have found significant evidence that bombs were targeting civilians, including women and children. According to a recent report, “In the past seven years, barrel bombs have killed [Syrian] civilians almost exclusively, an international team of scientists report Wednesday. Civilians comprised 97 percent of the deaths from these bombs.”

(A barrel bomb is essentially a large metal container filled with explosives and shrapnel. These bombs can be incredibly powerful, decimating entire city blocks. They are very imprecise weapons. Often, they are dropped from low-flying helicopters onto densely populated parts of cities.)

In addition, “The study also finds a dramatic rise in the number of children killed as the war [in Syria] has progressed. Children represented a small proportion of deaths, about 9 percent, in the first two years of the war. But since 2013, that proportion has more than doubled. Now nearly 1 in 4 civilian deaths are children. So far, at least 14,000 children have been killed in Syria by snipers, machine guns, missiles, grenades, roadside bombs and aerial bombs. About a thousand children have been executed. And more than a hundred were tortured and then executed.”

Nearly a million civilians have died in wars and conflicts since 2001. A significant percentage of them have been children.

*For the record, this line of thought has been used many times before. In Vietnam, the United States believed that a victory over the Vietcong was to be achieved by quantifiable “kill ratios,” to reach that elusive tipping point where the insurgency could no longer replenish its troops. This approach hard-wired incentives to secure a high “body count” down the chain of command, with the result that U.S. soldiers often shot civilians dead to pad their tallies and thereby move up the ranks. It is estimated that more than 2 million Vietnamese civilians were killed in that war.
Posted by Stephen at 8:38 AM No comments: