Your BRIEF Career as a Male Model 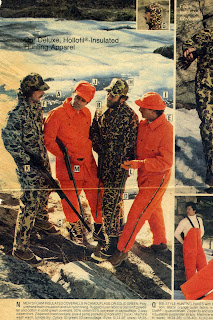 Back in the day when you worked as a newspaper reporter they sometimes called summer “the silly season” because there was not always enough hard news to report. As a result, reporters sometimes came up with pretty silly stories to fill the news hole (On a broiling hot day you once convinced a kid to pose over an egg cracked on the pavement to see if it would actually cook).

The author, third from the left, wearing a haute foam insulated camoflague hunters outfit with matching hat.
So, in honor of the current silly season you will file this story to fill the blog hole.

Recently your children were sorting through some old clippings of yours when they came across some odd ones that appeared to be torn out of a catalogue and showed some men wearing hunting outfits. They wanted to know why were these among your clippings?

The answer goes back to late 1970s when you lived in New York City. A friend of a friend was a photographer who needed models for an apparel shoot. You went down to the photo studio to audition, and were, quite frankly, shocked when the photographer said he could use you.

Early one morning the following week, with fantasies in your head of huge photos of your fashionably dressed self plastered in magazines and on billboards everywhere, you boarded an RV with three other “models,” a stylist, the photographer, his assistant, and the RV driver. While feasting on bagels and donuts, the photographer explained what you would be modeling: hunting outfits for the JC Penny catalog. 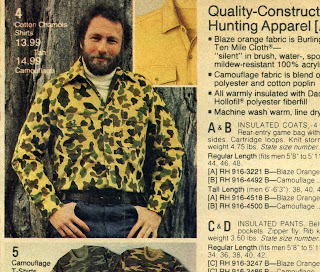 And here you are modeling the lastest (circa 1979) in all-cotton camouflage chamoix shirt.
Posted by Stephen at 8:08 AM