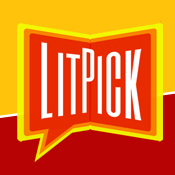 Hello, LitPickers! Today, we’ve got Todd Strasser on the set of “Extra Credit”! Todd is the author of the Help! I’m Trapped… series. Todd Strasser writes his books largely out of his own experience or remembered feeling, and always with his readers in mind. He tries to observe young people whenever he can, and when he can't, he will eavesdrop on their conversations in places where they hang out. One of his favorite things to do is visit schools, where he talks about what it's like to be a writer.
Do you have a solid outline before writing, or do you usually get ideas as you go along?
Both. I start with an outline and then get lots of ideas while I write. I incorporate the ideas into the story, which changes the outline, sometimes in subtle ways, sometimes in profound strokes, but always, to my mind, making it a better story. Generally, by the time I’ve finished the innumerable revisions, the resulting story bears little resemblance to the original outline.
Has someone you knew ever appeared as a character in a book (consciously or subconsciously)?
Oh, yes. Especially in Fallout, but I’m afraid if I say which ones I may get sued.
What do you do when you get writer's block?
I think that’s one of the great justifications for creating an outline. If I get writer’s block I can always skip to another place in the outline and pick it up from there. Often I’ll later discover that the thing I was blocked on really wasn’t germane to the story anyway. Another trick I employ for writer’s block is to do some research. I find there’s always something to research in my stories and doing so helps get my brain out of that tunnel-vision-writer’s-block thingy.
If you could live in a book's world, which would you choose?
Wonderland. The world PG Woodhouse created for Bertie Wooster in Jeeves would be pretty amusing to live in.  The world Neal Stephenson creates in Snow Crash. Any number of Steampunk universes. Plus, there must be a Kurt Vonnegut world or two that’s worth spending some time in.
What is your favorite book-to-movie adaptation?
Carrie, One Flew Over the Cuckoo's Nest, Jurassic Park, The Godfather, The Shawshank Redemption, Babe, Blade Runner, Schindler’s List, and probably my all-time favorite, McCabe and Mrs. Miller.
If you could have lunch with one other author (dead or alive!), who would it be?
I’m pretty sure it would be the living one. Unless you guaranteed that the dead one wasn’t a zombie or vampire, was at least somewhat animated, and could actually chat (I’d forgive him or her for not having much of an appetite. I wouldn’t have one, either). In which case, just about any dead author would do. I mean, wouldn’t you just die to get their take on what things are like on the other side?
Your Help! I'm Trapped books, about a boy and his friends that switch bodies with hilarious results, are probably your best-known works. Where did you get the idea for the zany series?
I was not a well-behaved student. Part of the reason, I suspect, had to do with undiagnosed learning disabilities. Back then it was called “under achieving.” Anyway, I drove teachers crazy. So when my own kids got to their middle grade years – corresponding to the time when my own school antics began to flourish -- I started thinking back to me at their age. Only now I was older and could look at it from the teacher’s point of view. That’s how the idea of switching bodies came about. It’s the delicious revenge a teacher could have if he were now the misbehaving kid while the misbehaving kid had to act as the teacher.
How did you get started writing?
By fits and starts. I can honestly say that had there been a vote in high school as to who was most likely to become a writer, I would have finished close to last.  I struggled with reading and am a terrible speller, and if I showed an affinity for anything in school, it was for the natural sciences. But somewhere I caught the writing bug and have been infected ever since.
Who influenced you?
Reading and writing were valued in my family. We had books and the New Yorker. My grandfather wrote songs and poems for fun, and my mother dabbled briefly in fiction and journalism. Sometimes I wonder if what motivated me was a need to prove myself to them. A mild dose of OCD doesn’t hurt, either.
Do you have a favorite book/subject/character/setting?
I’ve read so many amazing books that it’s impossible to select a favorite. The world today is more highly educated than ever and is producing more great writers than at any time in history.  I am sort of keen on steampunk at the moment.
What advice do you have for someone who wants to be an author?
Well, you have to write. So many people say they’re going to start writing just as soon as ….  And you’ve got to read in order to develop a literary standard to which you can compare your writing and revisions.
Where is your favorite place to write?
In front of a large white screen.
What else would you like to tell us?
Even though it feels like I’ve arrived at the end-of-the-world dance ten years too late, I’m working on a dystopian science fiction adventure novel. Working title: Moby Dick in Space
Sometimes I feel thankful that I’m not starting out as a writer today. I don’t think the competition for reader’s eyes has ever been greater, nor the talent pool deeper. Though, for all I know, other writers could have been saying the same thing back when I came along. No matter when you come along, if you’re a writer, you’ve got to write.