What Writers Can Learn From HOME ALONE

The 25th anniversary of the release of Home Alone is this month and I suspect it will bring back pleasant memories for many.  It was an enormously popular movie, and perhaps one of the first to achieve that rare distinction of being able to make grownups laugh just as hard as children.

A few people may remember that Home Alone was also a paperback movie novelization. For me, as the author of that novelization, it served as a lesson in how what appeared to be a fluffy comedy could mask a serious and disciplined writing effort.

The process of novelizing a movie begins and ends with the script, and possibly a few stills to give guidance to what the characters look like.  Movies are often composed of quick cuts between a number of different scenes, and the job of the novelizer is to organize those quick cuts into longer, more chapter-like episodes, as well as provide description, and supplementary scenes and dialogue where needed.

What I saw so clearly as a novelizer was that the foundation of any story is the message, the moral, the main idea. Movie-goers seeking entertainment aren’t supposed to be aware of the foundation and framework upon which the story is built. But if it’s a good story, the foundation must be there, and there’s no better way to recognize it than to take the thing apart, reorganize it, and put it back together.

We may think that a moral is limited to a fable or children’s tale, but it’s not. In serious movies we’re meant to be aware of the moral, but not so much in comedies (with certain exceptions: Fail Safe, Groundhog Day, Forrest Gump and even Finding Nemo come to mind.) But, because it is an essential component of all good stories, the moral must be present, even in a comedy.

If you ask people about the moral of Home Alone, you generally get two answers. Either “don’t forget one of you kids when going on a family vacation,” (which is what the parents in the movie do), or “don’t wish your family would disappear,” (which is what Kevin does).

I disagree with both. To understand the moral, look at Kevin at the beginning of the movie. John Hughes, the scriptwriter, makes sure to let us know that he is incompetent, helpless, and vulnerable. He can't take care of himself; he can’t even pack a suitcase. "You're completely helpless. Everyone has to do everything for you," complains one older sibling. “You are what the French call les incompetent,” says another.

It’s no surprise that Kevin wishes his verbally abusive family would disappear, and the next morning they’re indeed gone. After a brief celebration of his new-found independence, Kevin settles into a state of fearful unease. He’s scared --- of the basement furnace, of old man Marley (whom his brother warned was the snow shovel killer), of the gangsters in the TV movie he watches, of the burglars lurking outside.
But gradually Kevin begins to learn that he can function on his own. He can order in pizzas, go to the store, do laundry, and even tell the scary furnace in the basement to shut up when it threatens to terrify him. None of these scenes are random. They’re all designed to prepare the viewer for what comes next: the burglars. 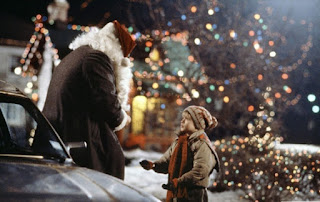 When the bad guys first arrive, Kevin is frightened. Believing that he caused his family to vanish, he sneaks out of the house to find the nearest department store Santa Claus. He has one Christmas wish this year, and it’s not toys or games. He just wants his family back. On the way home he runs into Old Man Marley at church, and learns something important: that even grown-ups can get scared. (Marley: “You’re never too old to be afraid.”) This gives Kevin license to face his worst fears and deal with them. 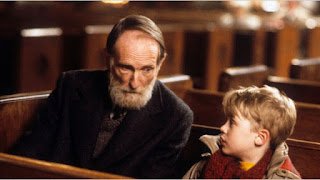 What follows is the romp, in which Kevin rises to the threat and does what no one ever thought even remotely possible. He takes care of himself and his home, at the expense of a lot of pain to the bumbling, hapless burglars. And, having eventually dispatched them, does something even more amazing: he cleans the house!

When his family returns home, they have no idea of the magnitude of what he’s accomplished. The final joke is that they’re merely amazed that he’s been self-sufficient enough to go to the store and buy milk, eggs, and fabric softener. And that he didn’t burn down the house. As one older sibling states, “He went shopping? He doesn't know how to tie his shoe. He's going shopping?” 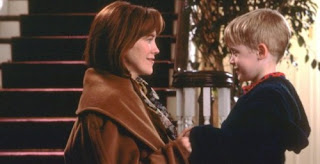 I wish John Hughes was still with us. Even though his films have been criticized in recent years for a lack of racial diversity, he still wrote so many great movies (The Breakfast Club, Ferris Bueller’s Day Off, National Lampoon’s Vacation, Pretty in Pink, and Uncle Buck, to name just a few) that are enjoyed to this day. I’d love to ask him if he ever meant for us to get the moral of Home Alone -- that we are all capable of doing a great deal more than we think we can. My guess is that he didn’t.  He just knew that without it, he couldn’t have written a great movie.