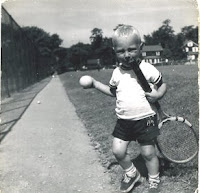 Tennis is a big part of your life. You started playing at a very early age. You father played with the same group of 6-8 guys every Saturday and Sunday morning for nearly 40 years. Your mother, who is 85 and suffered a stroke four years ago, still plays once a week.

When you were young, your father wanted you to be a great tennis player, but you were neither physically, nor mentally, cut out for that role. You liked playing, but did not enjoy the competition he insisted you participate in. When you raised your own children, you encouraged them to play, but never pressured them or insisted they play tournaments the way your father had. Now both of them like tennis, and, you hope, will play for the rest of their lives (your son’s main job this past summer was teaching tennis). But if they decide not to play later in life, that’s okay too.

When you were 14, it was cool for kids to not wear socks when they played. In those days the insides of tennis sneakers were very gross. Around the age of 16 you stopped playing entirely. This was one of the many ways in which you rebelled as a teenager. But somewhere around the

age of 22 you started playing again and have not stopped since, except when injured.

These days you play an average of two or three times a week in the summer and once or twice a week in the winter. You play with a group of about 8 – 10 guys, but at the core of that group is The Fab Four - Ron, John, Mark, and you.

The Fab Four have as much fun laughing and kidding each other as they do playing tennis. Tennis with them is a crazy mixture of jibes, jokes, jests, and rejoinders. Now and then one of you gets injured and can’t play for a few days or even weeks. It’s always a relief when you reunite and can talk in the past tense about your sore knees, bad backs, aching elbows, and other injuries.

You call these discussions “organ recitals.”

Tennis is not just a game for you and your pals. It is a chance to bond and escape (Oddly, tennis is so much a part of your life that when you go on vacation, you prefer not to play). It often feels like a separate part of your existence. You and your pals go out of your way to avoid talking about mundane or serious issues. Work is rarely mentioned, wives slightly less rarely, and children only somewhat more often.

Over the years, a number of guys in your group have come and gone. Most of them you liked a lot. Some had to stop because of injuries. Some turned to golf. But it is hard for you to imagine life without the Fab Four.
Posted by Stephen at 5:14 PM