One Book, One Community

You are headed out west on Sunday to spend the week in Vancouver, Washington (not to be confused with Vancouver, BC) where they are conducting a One Book, One Community program focusing on Give A Boy A Gun. You will be speaking at libraries, and at middle and high schools.

You were out in that area last fall when, in Portland, you gave a breakfast talk to school librarians and media specialists from Oregon and Washington. Portland is definitely a cool city. The public transportation trolleys (MAX) have special hooks in them where cyclists can hang their bikes. You were also told that the city of Portland distributes free bikes, painted yellow, that anyone can use. What would happen if New York put out yellow bikes for people to use? You have no doubt thieves would repaint and sell them.

By the way, the conference served an excellent breakfast of blintzes and sausage. One of the best conference breakfasts you’ve had. And, you highly recommend the rather titillating hand driers in the bathrooms in the Portland Convention Center (for those who go in for that sort of thing).

Library conventions are fun because you get to hang out with all these people who love and know books. You also get to meet cool people and other writers. On this trip you met Peter Hautman, who wrote Godless, a YA novel about religion that won the National Book Award (how cool is that?)

You have also written a (unpublished) YA novel about religion. It wasn’t very good and probably doesn’t deserve to be published. So it was interesting to meet someone who succeeded spectacularly where you had failed. Even better, Peter is a nice, down-to-earth guy. You didn’t get to hang out with him for long, but he is definitely a writer you would look forward to speaking to some more.

The dinner speech that night was given by Frank McCourt, whose book, Angela’s Ashes, was a huge bestseller and won a Pulitzer Prize. To be honest, you had once started the book long ago and quit at the point where McCourt’s third young sibling died, because it was just so unrelentingly sad. But at dinner, McCourt was the most charming, and funny speaker so when you returned to New York you listened to Angela’s Ashes on CD (which he reads aloud). 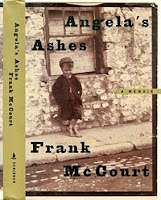 Once again you reached that sad point and were tempted to stop, but you listened onward and were rewarded with a wonderful tale. So wonderful, in fact, that you listened to ‘Tis and Teacher Man as well. McCourt is definitely one of those authors whose own reading adds enormously to the enjoyment of listening.
Posted by Stephen at 1:37 PM