Wish You Were Dead ... The SLJ review 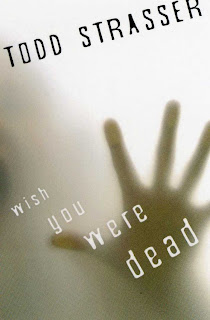 When a high school student announces on her blog that she hates Lucy Cunningham and wishes her dead, no one takes her seriously-until a few days later, when Lucy disappears. Madison Archer is particularly shaken by the disappearance, as she was the one who drove the missing girl home and was the last to see her that night. In addition to her guilt over not seeing Lucy safely to her door, Madison is also trying to uncover the identities of a cyber stalker who sends her Facebook messages lecturing her about her cliquishness and an anonymous "friend"who leaves her hastily scribbled warnings and pleas for help. When the blogger posts another name, a second student goes missing. And then a third. Madison needs to find her missing friends before it's too late-for them and for herself. The action proceeds at a smooth pace and hits all the right notes of a teen thriller: revenge-seeking outcasts, betrayal, mysterious strangers, and some violence and torture (though it is not graphically depicted). Characters are distinct; readers will be able to tell even the background characters apart... The social-networking technologies are blended seamlessly into the narrative. Strasser's... gripping plot will keep readers turning pages late into the night.-Brandy Danner, Wilmington Memorial Library, MA
Posted by Stephen at 9:10 AM