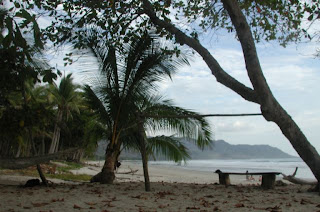 Yesterday Geoff and I finally attempted to surf, but the results were dismal. The surf was pumping, waves coming in, well … waves, with barely seconds of interval. Thus, by the time you fought through the first one, another followed almost immediately, usually succeeding in washing you back toward the beach and erasing whatever meager progress you’d made toward a wave you could ride. After fighting through the surf on our long boards and barely getting anywhere, we turned and rode white-water, which is sort of comparable to surfing in a washing machine.

At breakfast this morning we were visited by Igor the Iguana, a vertically-striped four footer who pokes his nose out over the edge of the roof and watches us. Periodically Igor puffs out a baseball-size sack in his neck and nods his spiny head vigorously as if agreeing with whatever we’re saying, but John thinks this is aggressive male mating behavior aimed at any nearby Ivana Iguanas who might be interested in the scent of his prehistoric phermones. 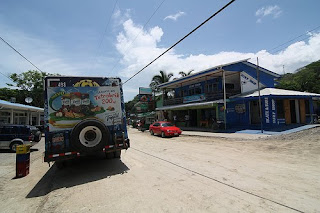 When Igor gets particularly excited he scampers over the corrugated metal roof, making a racket reminiscent of the New York City subways. The first time you hear it, it’s a bit of a jolt.

I was disappointed this morning to discover that my favorite rundown beachside fried fish shack on the Mal Pais side of us has been torn down and replaced with the small shanty town built of the aforementioned corrugated metal sheeting. At seven this morning babies were crying and several men reeking of eau de alcohol were scavenging around the edge of the beach for the dry driftwood required to keep the home fires burning. It is somewhat incongruous to think that some of the poorest Costa Ricans live on some of the most beautiful shoreline on earth ( I admit that I’m perversely delighted that they have access to such beauty to counterbalance their otherwise dismal living conditions).

Another slightly disconcerting aspect of any visit to Mal Pais is that, with the exception of Geoff, our party is composed of beings whose average age is surely 30 years older that the average age of just about everyone else in town. Continuing a trend that I’ve noticed for years, numerous young Caucasians of both sexes, who trek about in torn cutoffs and lug backpacks, wear their fair hair in high maintenance dreadlocks. There is also a large cohort of muscular skinny tattooed young men who seem to go everywhere with pointed white slivers of fiberglass half the length and thickness of our boards, but with which they somehow perform mind-boggling ballets (when the surf is good) on the green blue faces of waves. And an equal cohort of thin tattooed young women who, even in this liberated age, tend to sit on the beaching taking the sun and watching. 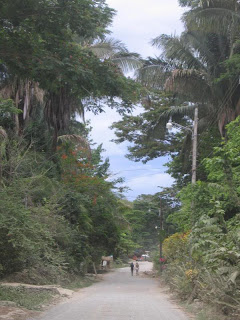 Even among the locals who work in the shops, restaurants, and small resorts, the average age is just barely post pubescent. In past years, before the gas station on the edge of town had an actual pump, our gasoline would be delivered to our car by young boys lugging plastic jugs from a large above-ground tank. One wonders where the elder Costa Ricans, and by this I mean those in their forties and up, go after their time here.

Internet down again. So this will be posted when and if CRSTC manages to get its act together.
Posted by Stephen at 9:44 AM