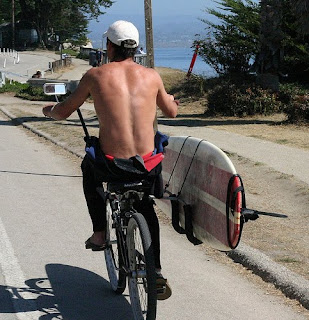 Having not had enough room to pack Geoff’s 8 ½ foot Al Merrick, John’s 9 foot Rusty, and my 9 ½ foot Donald Takayama boards for the trip, I have been forced to temporarily rent a seriously inferior plastic Bic board. I did find a much better rental board down the road in Santa Theresa in an establishment that is half coffee shop, half surfboard rental. The problem, I’ve been told by Dwayne (who runs the coffee shop) is that yesterday and today the young man who is in charge board rentals has chosen not to come to work. Dwayne took today off to move himself to a new apartment.

On the subject of surfboards, one visual diversion is to observe the entertaining means by which locals try to transport them, especially when bicycles and scooters are involved. Some enterprising young surfers have welded surf racks to the sides of bicycles, but more often bike riders steer with one hand and hold the (short) board with the other. Things get more creative on scooters and smaller motorcycles when there are two passengers and two boards. One configuration has the driver driving and the passenger sitting behind holding a board under each arm. But last night we saw two young men on a motorbike with the passenger balancing two long boards on their heads. Seemed fraught with potential disaster, but this morning on the road we did not find any broken boards, so perhaps they made it to wherever they were going. 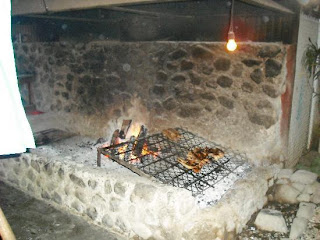 Update: Was able to get the board I wanted and John and I had a wonderful Sunday morning session, probably the best in many years with each of us getting several very long rights and slightly shorter but still excellent lefts on large, glassy waves. We also both got pounded hard when we missed, but that’s surfing.

We ate at a wonderful smoke-filled open-air Argentinean restaurant with an open hearth last night. The grill was an old bed spring. Like most local establishments the roof was corrugated metal. Rather than employing a tradition chimney, smoke from the hearth was allowed to rise to the roof and then funnel out of openings at either end. The crowd was mostly Americans, Europeans and South Americans.. 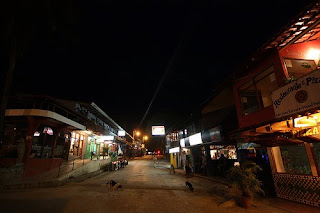 Later, we walked back along the road, headlights, dogs, and couples on motorbikes coming out of the dusty dark like specters out of a mist – a reminder that we were nowhere near home. Sometimes it’s good to be far, far away.
Posted by Stephen at 6:12 AM