Finding the surfing still uninviting this morning we jumped into the car and headed north to Playa Hermosa, a vast, flat mostly uninhabited sand beach where the surf was much better – overhead sets coming in every three or four minutes -- and we were able to paddle through the waves to the outside of the break from where we could catch a few waves. Unfortunately the waves jacked up fast, more suitable for short boarding than long boarding, and we spent more time below the waves then on them. But, as always when you’re in Costa Rica, it was good to be in the water. Even the dreadlocked young man who took off near me and snapped his short board in half seemed relatively unperturbed. He’d come prepared and had another board in his car.

The road north from Santa Theresa is unpaved dirt with craterlike potholes and ridges deep enough to repeatedly leave an impression on our car’s undercarriage, but I found both the dust and bumpy ride oddly reassuring. Telecommunications and the Internet may (now and then) reach Mal Pais, but many of the rest of society’s comforts, such as paved roads, has not. In addition to cars and trucks, much of the traffic – yes there is some of that – comes in the form of small motorcycles, bicycles and ATVs, often ridden by young men and women wearing ski goggles and either bandanas or painter’s masks covering their noses and mouths. 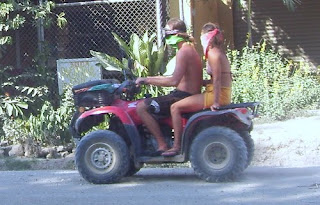 The clouds of light brown dust settle on everything near the road. Cars and car windows are covered with it, and using the windshield washers only makes it worse, creating – when sun dried -- an opaque brown cement which requires hammer and chisel to remove. Here at The Place most horizontal surfaces are wiped down at least twice a day. In the morning when coffee is available, the little pitchers of cream are covered with plastic wrap except for the very tip of the spout, as are the otherwise open bowls of sugar. While here I thumb my nose at Pledge and other dust-removal products. 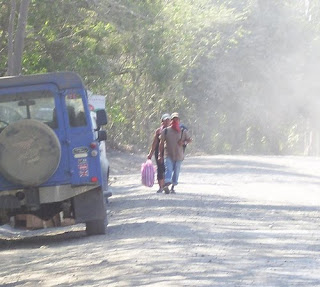 As we encounter more and more exotic flora, fauna, and geology, one wonders how long it will be before we can take a photo of some mysterious creature, plant, or mineral with our cell phones and receive instant identification. The information will soon be instantaneous, but we will lose the conditioning to research. In the future I wonder if Internet failures will be considered major disasters comparable to hurricanes and earthquakes. Maybe they already are.
Posted by Stephen at 8:07 AM