Your second YA novel, Friends Till the End (published in 1981), was about a young man who is stricken by cancer. It was inspired by Bill Soiffer, whom you got to know while working at the Middletown Times Herald-Record in Middletown, NY. Later you both shared an apartment in New York City. As a reporter for the Bergan County Record, Bill would commute to New Jersey each day while you headed for Madison Avenue and the Compton Advertising Agency where you were supposed to write advertisements for Tide detergent, but spent most of your time writing fiction.

Bill was one of the funniest, and coolest, people you’ve ever known. He was always calm, composed, and insightful. It’s hard to recall him ever becoming upset or angry. He was easy-going, and good company, and you had many adventures together. He also introduced you to the music of people like Tom Waits and South Side Johnny. 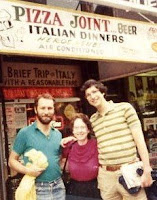 One morning about a year after you’d started sharing the apartment, Bill woke up with swollen glands. His bed was drenched with sweat. That afternoon you went with him to his doctor, who sent him straight to the hospital for tests. (That's Bill, Susan Pfeffer, and you in New York City in the late 1970s).

A few days later the results came back. Bill had Hodgkin’s Disease, and began to undergo chemotherapy. His hair fell out, he lost weight, and every two weeks, after his treatment, he would be violently ill for several days. In its simplest terms, chemotherapy was poison. It was supposed to kill cancer cells, but it wasn’t exactly good for you.

During this almost barbaric treatment, Bill was superhumanly brave. You spent a lot of time with him while he was ill and never once did he complain, or get upset, or act scared. The thing that bothered him most was why he’d come down with that terrible disease in the first place.

About a year after Bill started the chemotherapy (and later, radiation) treatments, the doctors said he was in remission – there was no evidence of the disease in his body. Shortly after that, Bill applied for a reporting job on the San Francisco Chronicle. Even though he was still receiving follow-up treatments, had not fully recovered from his ordeal, and knew almost no one in California, Bill packed up his car and drove west. You never quite understood why he suddenly decided to move so far from friends and family. It might have had something to do with a long-term relationship that had recently ended. Or perhaps it was a sense of mortality heightened by his illness that inspired him to become adventurous. (Bill and you at his wedding in San Francisco). 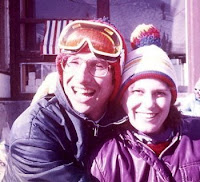 Bill lived in California for roughly 13 years. He met a wonderful woman named Jacquie, who married him and helped take care of him when the disease returned again, and again, and again -- each time requiring a more extreme, and difficult to endure, treatment. Bill once told you that his doctors believed he was the most treated Hodgkin’s patient ever. Then, weakened by the cancer and its treatment, he developed an auto immune disease that attacked his nervous system and muscles, leaving him, for a time, almost unable to get out of bed.

The last time you saw Bill was in New York where he’d come to promote a book he’d written called Life in the Shadow, about his 14-year battle with Hodgkin’s Disease. You had brunch with him and Jacquie; he had difficulty walking and had to be helped up after sitting. Afterwards you helped him out to the street to get a cab. Just before Bill got into the cab, he turned to you and said, “Hug me, Todd.”

It was his way of saying good-bye.
Posted by Stephen at 1:31 PM