Tom Catches a Big One 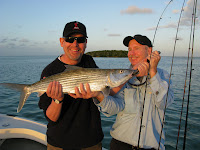 You were down in Islamorada last week with your old friend Tom Hundley to fish with the Zen master fishing guide of the flats, Vic Gaspeny (both to the left). You’ve known Tom since you worked together as reporters at the Times Herald-Record in Middletown, New York. After a few years there, you departed on a circuitous route that would eventually lead to writing YA fiction. Tom took a more journalistic route, working for several other newspapers before becoming a foreign correspondent for the Chicago Tribune.

In the 18 years that followed, Tom, his wife Kathy, and eventually, their daughters, lived in Warsaw, Jerusalem, Rome and London, with Tom often gone for weeks at a time traveling around much of the Middle East and eastern Europe reporting on a variety of conflicts.

Tom is tall, thin and looks quite a bit like -- and has a similar disposition to -- the actor Harrison Ford. He is alternately funny, quiet, insightful, wry and self-deprecating (anyone interested can Google Tom Hundley AOL to see a video of him being interviewed). He was down in Islamorada primarily to fish, and secondarily to write a travel piece for the Chicago Tribune Sunday magazine. You went along for the ride.

Tom didn’t fish back in Middletown, but a few years later, finding himself employed at the Detroit Free Press, took up flyfishing for trout in various northern Michigan streams. Since then he has fished whenever and wherever he could, including the American West, Scotland, and even Bosnia, where he was arrested by the Serbian militia and spent a night in jail while the authorities tried to figure out if he was a spy, and, if so, what secret information he could possibly gain access to while knee deep in a trout stream.

For years you’d urged Tom to try the salt-water version of the sport for bonefish down in the Florida Keys, and, even though you’ve pretty much given up fishing yourself, you jumped at the opportunity when he called and asked if you’d join him. It wasn’t so much that you had any real desire to fish as it was to accompany him on his first visit to the remarkable world of backcountry fishing and to introduce him to another funny, droll, self-deprecating person who just happens to be the most remarkable and talented fishing guide you’ve ever encountered, Vic Gaspeny. 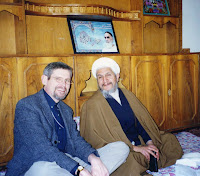 (That's Tom in Iran in 1999 hanging out with the Ayatollah)

You first fished with Vic in the late 1980s. Unlike many fishing guides who are strictly 9-5 or 8-4, Vic generally goes out for only four hours a day, and almost always the best four hours for catching fish. Just before you and Tom arrived, Vic had gotten up at 2 a.m. for three nights in a row in order to take fishermen out from 3:30 to 7:30 a.m. to catch tarpon.

Catching a bonefish on a fly is sort of like flipping a coin and having it land on its edge. It’s been known to happen, but no one would be insane enough to count on it. On Tom’s first day of fishing things got off to a shaky start when he had difficulty adjusting to the heavier saltwater equipment and larger saltwater flies. Rather than try immediately to catch a bonefish, Vic thought it advisable to practice on some “easier” fish – speckled sea trout and ladyfish, with the odd lizard fish and jack crevalle tossed in for variety.

But then, with the sun nearing the end of its daily transit (prime bonefishing time) Vic suggested that Tom have a go at the main event.

Bonefish are among the more skittish and hypersensitive creatures in the ocean. The slightest sound – dropping a pair of sunglasses on the boat deck, or the heavy plop of flyline on water – will spook them. Even the vibration in the water caused by shifting one’s weight in the boat is enough to send a bone streaking away to the safety of deep water. Given Tom’s unfamiliarity with the equipment and with the sport in general, Vic was clearly doubtful that he could catch one.

The only advantage Tom had was based on the bonefish’s predilection for shrimp. To entice the fish within range of Tom’s casts, Vic would now and then fling “chum” – in this case a ladleful of chopped shrimp – about 40 feet from the boat. Tom would then cast his fly into the same area. As a result, he did get several “hits,” that is, moments where a bonefish, thinking the fly was a small and tasty crustacean, would pick it up in its mouth, only to discover that it was not food and spit it out. The trick in bonefishing is to hook the fish at the moment it picks up the fly and before it decides to spit it out.

After an hour, with the sun was starting to disappear behind a distant mangrove key, Vic began hinting that it was almost time to return to Bud n’ Mary’s marina. Suddenly Tom’s line went tight and the reel began to scream. Tom had hooked a fish, which now began to streak away at speeds that would make a jet skier blanche. There was no doubt that it was a bone. No other fish of that size is capable of running that hard and fast for that long.

Vic began to coach him – “Keep the rod bent. Keep the line tight” – but when the fish kept going farther than expected with no sign of slowing down, our guide had to make a quick decision. Tom’s reel was running low on line. If Vic didn’t do something fast, the fish would run off all the line and it would snap. “Hold on!” Vic grunted and started the boat. With Tom in the bow clutching the rod, and close to 150 yards of line now stretched between rod tip and fish, we took off in pursuit.

Any number of things can go wrong when flyfishing for bones. Not only is it close to impossible to hook one, but once hooked, a bone flees so fiercely that line can accidentally get wrapped around any available objects – arms, feet, bow cleats, coral – and break. Knots can unravel and let go, reels can jam, hooks can be flattened in the bonefish’s powerful jaws and spit out, and, most ignominiously, an opportunistic shark can happen upon the scene, in which case the bonefish becomes dinner.

With Vic steering the boat in pursuit of the fish, Tom cranked the reel, trying to regain as much line as possible. Meanwhile, the fish ended that first long run, but kept fighting. That was when Vic first suggested – in his typically understated way – that this fish might be “large.”

Another five minutes – perhaps more – passed while Tom continued to play the bone. The fish repeatedly tried to flee, and Tom gamely hung on and reeled back line whenever the bone paused to rest. Finally we saw the fish in the aqua-blue water, and, just as Vic had predicted, it was big. Moments later, netted and weighing in at more than 11 pounds, photos were quickly shot and the fish released. Vic said it was the largest he had seen in many years. Larger than many bonefishermen catch in their entire lifetime.

And to think it was not only Tom’s first bonefish, but his first time trying.
Posted by Stephen at 5:19 PM