More than 40 years ago eight young Long Island ski fanatics from the Wheatley School would pile onto Peak Ski Tour buses and go for day trips to Hunter or Bellaire Mountains. Often on that bus were Joel Blumenthal, Ken Gallard, Dave Hechler, Jed Berman, and you. If you went to Bellaire you were sure to run into Tom Glaser, David Dachs, and George Gettinger, who went up every weekend with their parents.

Later, when a few of your friends got their drivers licenses you would go for day trips with these guys, leaving at five in the morning, skiing all day and returning, exhausted, by eight or nine at night. And over winter vacations you and your buds would travel up to Stowe, Vt. and stay in a dorm in the attic of Mrs. LeMaire’s farmhouse for $3 a night (for an additional $1 you got a large, filling breakfast that often kept you going until dinner.)

One frequent topic of conversation was how great it would be someday to be ski bums somewhere out west and ski everyday in deep, light powder snow (you did see powder snow now and then in the east, but it was usually heavy and wet and was like skiing in wet cement).

During college you all got together to ski now and then, and after college, Ken, David D., and Joel did move out to Taos to live as ski bums.

Flash forward several decades to your 40th high school reunion. And there were Joel, Ken, Dave, Jed, Tom, David D., and George. Well, it wasn’t long before a plan was hatched. Ken had stayed in Taos and become a professional photographer and met Stevie Bass, so that was the logical destination (Ken knows everyone in town and was able to arrange for lodging and ski rentals).

And here you are, six of you in one condo (Ken and David D. join the group everyday to ski and each night to carouse). The skiing is great, but the best part is talking and laughing about the old days and everything since then.

(All photos by Ken Gallard except group photo by George, who is below) 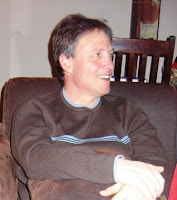