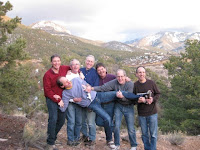 You are back from Taos, worn out and sick, but feeling enormously grateful for the experience. Already the trip stands out as a life adventure that you will never forget. Yesterday, flying back with Jed and Dave H., you wondered how it came to pass that 41 years after high school graduation, half a dozen friends from those bygone days (some of you even went to kindergarten together and have known each other for more than 50 years) could wind up sharing a condo at the base of the Taos ski area for a long weekend. 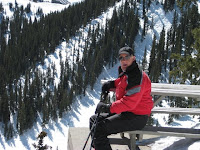 It wasn’t because you’d all kept in touch through the years. In fact, some of you had not seen or spoken to each other in decades. The catalytic event surely was your high school’s 50th anniversary a few years before that resulted in a dozen “mini reunions” held on the same weekend. But still, it must have taken something more than that one event to pull together this group of guys. (Dave Dachs went to Roslyn High, but no one holds that against him)

The answer, you suspect, lies in some “deeper” reasons – a love of skiing, a common past, a shared outlook. How else can one explain how this group of disparate individuals (well, perhaps not so disparate – of the six of you who shared the condo, two are dentists, two are businessmen, and two are writers) could ski, eat, share bedrooms, and laze around for nearly 90 hours of continuously enjoyed company? 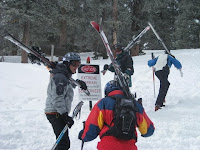 (It should be noted that there were actually nine of you. David D. had a room in another establishment, but spent most of his time with the group. Kenny – surely the only photographer/cowboy/rancher the Wheatley School has ever produced – and Stevie share a house and ranch nearby).

Perhaps it might have been more easily understood had the group spent much of its time reminiscing about the old days. And while there was some of that, it was considerably less than one might expect.

Instead there was, as befits a group of aging weekend warriors, a fair amount of discussion regarding aches, pains, injuries old and new, and other matters of the body (posting a daily blog called “The Morning Bladder Report” was considered), as well as conversations regarding the economy, politics, parents, wives, children, siblings, and a great deal of time spent bemoaning the weather and resulting ski conditions. 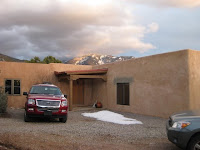 (The front of Kenny's and Stevie's hacienda, which Kenny built himself with the help of friends.)

But underlying it all was a sense of camaraderie that, you suspect, could only be the result of having known each other for so long. The group felt a sense of familiarity and ease that – despite all the different paths you’d taken – was still there after all those years.

In many ways -- the ample amounts of laughter, the teasing and jokes – it was as if you were all still in high school. But beneath that was something more profound. Something that, sadly, can probably only come with time, aging, and a certain amount of heartbreak and sorrow. Truth be told, scattered through all the fun and joy last weekend were indeed a few moments of solemnity, melancholy, and even a few tears. 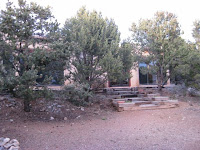 (The back of the hacienda. The large black "windows" are actually passive collectors of solar heat.)

Perhaps what made the weekend so poignant was what went unspoken -- that you've all reached a point where you know that life is more fragile, more random, and more arbitrary than any of you would like to admit. That no matter how hard you’d all worked to get to a place in life where you could jet out to New Mexico for a weekend, there’d been a certain amount of luck, serendipity, and good fortune that had come your way, too (begining with the fact that you'd all had the good fortune to grow up in an area called the Roslyn Country Club, and attend the Wheatley School). And that no matter how hard one tries to insulate oneself, life is always a roll of the dice.

As Anthony Lane so aptly put it, “We know, in the end, that a sense of security is always false.”

And because you all shared that common knowledge, the days and nights were imbued with a sense of caring, concern, and even protectiveness for each other. As if you were not just old friends, but survivors as well. So along with the goofy laughter came the knot in the stomach each time one of you did a face plant; the head count whenever the group stopped on the slope to catch its breath; the reminders each morning to take ones meds and stay hydrated.

As the saying goes, “Make new friends, but keep the old. One is silver, the other, gold.” There may not be a lot of good news about growing older, but one bright spot is the depth of friendship, caring, and camaraderie that only time can bring. You are already thinking about next year’s ski reunion. And most importantly, you hope all the guys will be there.
Posted by Stephen at 5:38 PM